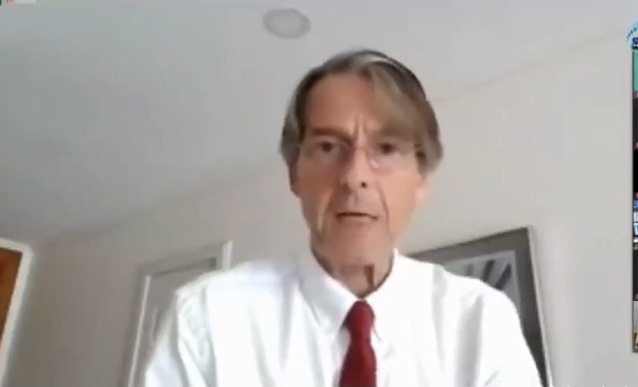 I’ve used the term ‘Pandemic of Medical Malpractice’ before.

Because the majority of COVID-19 related deaths weren’t caused by this virus.

They’re attributed to the deadly protocols and denial of early treatments.

Dr. Michael Yeadon is the former vice president and chief scientist for allergy and respiratory at Pfizer.

Dr. Yeadon had a career in Big Pharma that spanned decades.

But he’s been an outspoken critic of everything surrounding this medical warfare waged against humanity.

Dr. Yeadon recently made claims that the majority of COVID-19 deaths were a direct result of remdesivir or midazolam.

Remdesivir has remained a standard COVID-19 protocol in ICUs.

Fauci slid remdesivir into treatment guidelines almost, it seems, based on his say so.

He hadn’t treated patients for decades if he ever did.

Remdesivir as ‘standard of care’ for Covid-19 resulted in huge numbers of avoidable deaths. How it is that medics appear not to know the characteristic toxicity (which includes renal function declines) & just put their patients on this stuff? I don’t know.

I’ve personally intervened in at least three cases where remdesivir had been started in patients hospitalised with Covid-19.

I’m not a medic so my approach has been to recommend the anxious relative demand an immediate second opinion. They’re all alive. One is the husband of a friend of my sister’s.

Note also that respiratory viral illness isn’t obstructive. Patients can become distressed if their gas exchange is poor & they’re desaturating. But they don’t need mechanical ventilation coupled with sedation. Instead, an oxygen mask or nasal cannula will often help a lot, and if it doesn’t, your patient may be unsalvageable.

In the U.K. the early default was sedation with excessive doses of midazolam & ventilation. Very few people lived through that.

The U.K. Department of Health had purchased a two years supply of midazolam in spring 2020. The NHS had also stockpiled a years supply by hugely reducing prescriptions for it in 2018-19.

So during the Great Panic of spring 2020, they found it appropriate to burn through 3 years supply of midazolam.

Dodging protocols. they administered 10 times the usual dose. No wonder so many elderly men died.

Do you recall the debates in U.K. parliament about whether the NHS had enough syringe drivers? These were needed to administer the fatal & inappropriate medications.

So the PCR test was intrinsically unsuitable as a diagnostic and was used to over diagnose “Covid-19”. Whilst most subsequent deaths were either in people whose imminent death wasn’t a surprise (age + pre-existing chronic illnesses) or occurred directly as a result of hopelessly inadequate medical interventions & drug treatments.

Virtually none died SOLELY because of infection with this virus. Many were murdered or at least due to unthinking medics “only following orders”.
Fauci was part of the suppression of emerging, effective pharmacological treatments like hydroxychloroquine & ivermectin.
How did he come to wield such power?
Money.
As director of the National Institute of Allergy & Infectious Diseases (NIAID) his external budget was for Research.

Dr. Yeadon discussed the use of midazolam in this video:

WATCH: Psaki Gets Snippy After Peter Doocy Grills Her Over Biden Violating Mask Mandate; “Don’t Focus On It”

Join Us On Telegram !

WATCH: Psaki Gets Snippy After Peter Doocy Grills Her Over Biden Violating Mask Mandate; “Don’t Focus On It”